A recent amendment to Bulgaria’s electoral system (February 2016) has resulted in increased voting restrictions for Bulgarians living abroad, who can now only cast their ballots in diplomatic missions. Drawing on data from the Electoral Integrity Project, Andrea Fumarola and Nikolay Marinov assess what the new rules may mean for the country’s democracy.

The Bulgarian National Assembly has recently held an extraordinary sitting to adopt amendments to the Election Code. These changes, proposed by the right-wing party Patriotic Front, were passed with a 139 to 35 vote with eight abstentions. Some of the most relevant provisions include the introduction of compulsory voting rules and restrictions concerning the possibility for citizens abroad to vote outside Bulgarian diplomatic missions, thereby banning or limiting the use of other locations as polling stations. Bulgarians living abroad have expressed their anger at this reform, organising protests all around Europe, and arguing that the amendments will deny millions of citizens abroad from their right to vote.

The integrity of the electoral process: some evidence

Since its independence in 1989, Bulgaria has had a good reputation for conducting free and fair elections, as reported by specialised agencies such as Freedom House and Polity IV. However, new evidence has been gathered by the Electoral Integrity Project. The 2015 annual report compares the risks of flawed and failed elections, and how far countries around the world meet international standards. The report gathers assessments from over 2,000 experts to evaluate the perceived integrity of all 180 national parliamentary and presidential contests held between 1 July 2012 to 31 December 2015 in 139 countries worldwide, including 54 national elections held last year. Forty experts are asked to assess each election, using 49 questions, with an average response rate of 30%. The overall 100-point Perceptions of Electoral Integrity (PEI) index is constructed by compiling the responses.

The PEI score obtained by Bulgaria corresponds to the average of the evaluation of its performance in the2013 and 2014 legislative elections, when the centre-right party, GERB (Citizens for European Development of Bulgaria) led by the former Prime Minister Boyko Borisov, needed a second early election to find a majority in the National Assembly. GERB won 84 seats out of 240 (32.7%), not enough to avoid the formation of a coalition (minority) government with two newborn parties, the centre-right Reformist Bloc and the centre-left party Alternative for Bulgarian Revival, plus the outside support of the Patriotic Front.

Figure 1: Perceptions of electoral integrity in the European Union (2012-2015) 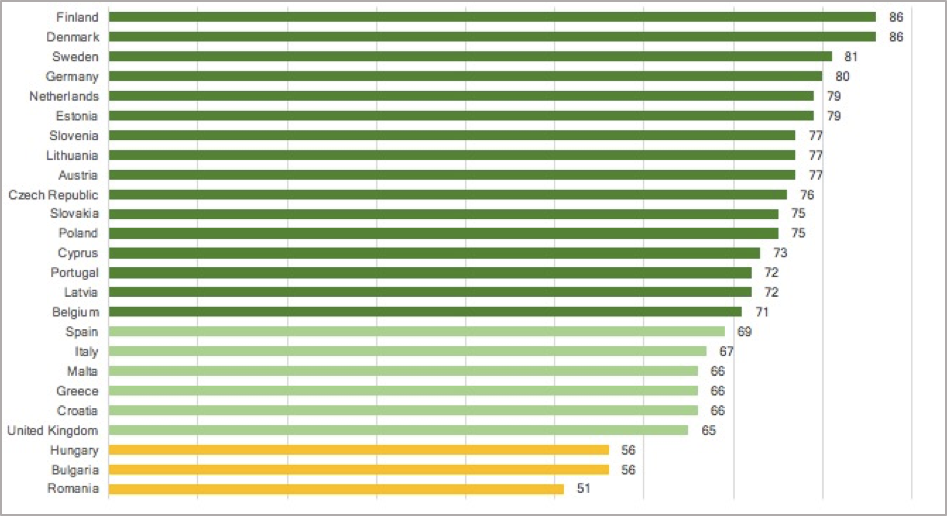 Note: This article gives the views of the authors, and not the position of EUROPP – European Politics and Policy, nor of the London School of Economics. Featured image: voters filling in their ballot papers in front of the Bulgarian embassy in London, October 2014. Credits: Tena Prelec / EUROPP.